You all did such a great job voting in the PCAs (People’s Choice Awards) so we wanted to give you a chance to win a cool prize! 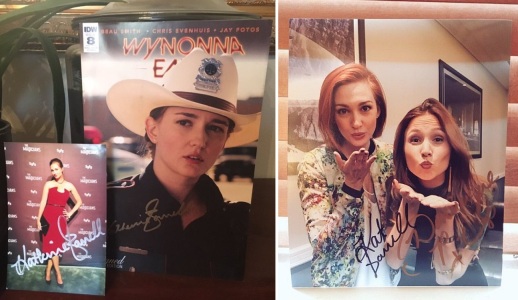 To enter follow the steps below and post a tweet talking about why you love Wynonna Earp and/or the Earper fandom. We’ll draw two random winners from all of the valid entries. One winner will get the Kat Prize Pack and the other winner will get the WayHaught signed photo.

“I love the wonderful job that #WynonnaEarp has done with representation as well as the kindness of the Earper community. #WhyILoveWynonnaEarp @WynonnaFans”

You can tweet as often as you like but only one of your tweets will count as an entry in this giveaway.

We’ll randomly select the two winners from all of the valid entries.

This giveaway is open to Earpers all around the world.

Winners will be announced on the @WynonnaEarpPod & @WynonnaFans Twitter accounts on Friday November 9, 2018.

Be sure to look through all of the tweets using the #WhyILoveWynonnaEarp hashtag so you can find some new Earpers to follow!

This site uses Akismet to reduce spam. Learn how your comment data is processed.